Tired of charging your phone frequently?

Wi-Fi is everywhere,you use it when you are at home,at work, at the coffeehouse. It’s kind of annoying to charge your phone twice a day,(sometimes even more!!!)

Engineers from the from the University of Washington in the US achieved 10,000 times less power than conventional methods.  That means you can watch videos, play games and download data without sacrificing battery life.

“We wanted to see if we could achieve Wi-Fi transmissions using almost no power at all,” says one of the team, Shyam Gollakota.

“That’s basically what Passive Wi-Fi delivers. We can get Wi-Fi for 10,000 times less power than the best thing that’s out there.” 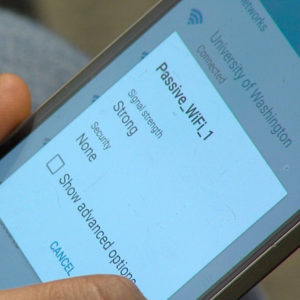 The team will present a paper on the result in March next year at the USENIX Symposium on Networked Systems Design and Implementation.

It’s listed as one of the top 10 breakthrough technologies of 2016 by MIT Technology Review.

How does it work?

Wi-Fi signals require information to be sent across a digital frequency, known as a digital baseband, as well as an old-school analogue radio frequency (RF).

Digital baseband technology has gotten a whole lot more efficient over the past few decades. It allows information to be sent using hardly any energy at all. On the other hand analogue radio frequency devices have stalled, and still suck up hundreds of milliwatts of power.

That’s a problem, because to receive Wi-Fi on your smartphone, you need a digital and an analogue RF receiver, hence your phone’s crappy battery life.

The new University of Washington system overcomes that, by decoupling analogue and digital, and relegating all analogue RF functions to one single plug in device.

That plugged in device generates the Wi-Fi signal using an array of sensors, and those Wi-Fi packets are then reflected and absorbed using a digital switch known as the ‘passive Wi-Fi’ device, which runs on barely any energy at all.

The passive Wi-Fi bounces the information to your smartphone or router, where it can be received by consuming only 15 to 60 microwatts of power – 10,000 times less than current devices.

You can see how that works in the video below:

In real-world tests, the passive reflectors could communicate with off-the-shelf smartphones even at distances of 30 metres (100 feet).

“All the networking, heavy-lifting and power-consuming pieces are done by the one plugged-in device,” said one of the team, Vamsi Talla.

“The passive devices are only reflecting to generate the Wi-Fi packets, which is a really energy-efficient way to communicate.”

Not only could this save your phone’s battery life, it could also finally make that ‘internet of things’ we’ve all been hearing about so much more feasible – in the past, it would have cost huge battery life to have things like your fridge and washing machine connected to the internet.

The research was funded by the National Science Foundation, the University of Washington and Qualcomm.

You can read the paper on the device here.