Home
Tips & Tricks
How to catch dinner in the wild: 2 easy snares

Imagine that you’re out for a hike. Even though you planned out your trip pretty well, you get lost. It’s getting dark and you don’t know how to get back home. You’re hungry, it’s been hours since you last ate. That means it’s time to snatch up dinner in the wild!

Before you can capture the animal you eventually want to eat, it’s important to know where your prey is located. You can set up a trap and wait for an animal to eventually fall into it, but that could be a long wait. Before you set up a trap, look for signs of animals in the area. Prints, animal droppings, plants that have been chewed, etcetera.

Ideally, an animal will walk through a snare, and its head will catch in the noose. The animals will panic and while it struggles, the noose only becomes tighter.

The simple snare
When you place a simple snare, choose a place that is often visited by the type of animal you’d like to catch. If you want to catch a deer, a snooze that’s made for a rabbit isn’t going to cut it.

The simple snare works, well, in a very simple way. You create a noose out of twine and fine wire, and attach it to a stick in the ground.

Unfortunately, there are some problems with the simple snare. Like explained above, you have to decide beforehand what type of animal you want to catch. The noose also needs to be kept open at all times, preferably with sticks. A noose made out of fine gage wire is a good choice. 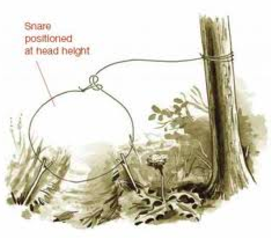 The Twitch-up Snare
This is a very effective snare, although it requires some patience. The twitch-up snare will snap the neck of your prey, which means you don’t have to kill it after you’ve caught it. You will first need to find a young tree that is growing across the trail. You can use a piece of twine to hold up the sapling and then use a piece of twine to connect it to two sticks, driven into the ground beforehand.

A big advantage of the twitch-up snare is that it pulls your prey up in the air. This way, it’s harder for other animals to snatch up the prey you just captured. 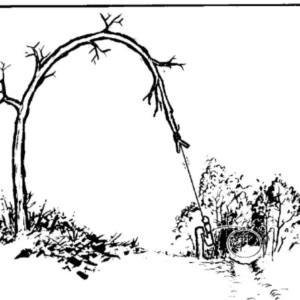