New research finds that a fish living in the water off an eastern coast of the US has evolved to survive 8,000 times more toxic waste than normal fish.

Killifish or mud minnow is a striped fish which resides heavily polluted estuaries such as New Jersey’s Newark Bay and Virginia’s Elizabeth River. Scientists have concluded that it survives due to an extreme mutation which lets them endure toxic waste.

Andrew Whitehead and his team put together a study about adapting to pollution. What they did was take the specimen from various polluted sites and testing their genes. The specimen contained about 400 Atlantic killifish found in the contaminated water along the US East Coast. In their sequenced genes, they detected similar mutations  within each population. A textbook case of convergent evolution. In evolutionary biology, convergent evolution is the process whereby organisms not closely related, independently evolve similar traits as a result of having to adapt to similar environments. 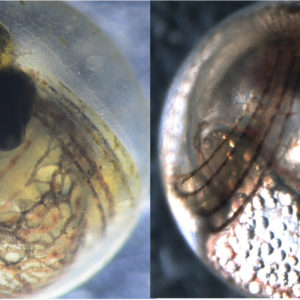 At left, a normally developed Atlantic killifish embryo, and at right, an embryo affected by a group of chemicals called PCBs. The fish on the right has a deformed heart. while killifish that have evolved tolerance to chemicals show limited signs of defects. (Image: Bryan Clark/U.S. EPA)

These mutations somehow managed to prevent the toxins damaging the cells in killifish. What’s more, they are unique to the killifish living in the polluted waters, because they are not useful in unpolluted environments. However, this kind of adaptations of human waste, although remarkable is not particularly ideal situation. As Whitehead explained, not all species can adapt to changes. Some do not possess genetic variations that grant quick evolution.

The killifish’s tolerance to pollution is a result of the diversity of its genes. Changes in killifish genome are heritable and have become fixed within previously exposed populations. It allows them to survive the random shuffle of mutations until a winning combination develops. Or as Whitehead told National Geographic, “It’s really important when the environment changes abruptly to have the necessary cards in hand.”

Although impressive, these mutations do come at a cost. The predators can become endangered. The big fish eats smaller, birds eat fish and who knows when can either end up on our plate.