Home
news
Leoni, The Zebra Shark, Changed Her Reproduction From Sexual to Asexual

Zebra shark at Townsville’s Reef HQ Aquarium has made a historic change that could save her species.

Zebra shark, named Leoni, has switched her reproduction from sexual to asexual. In the absence of a mating partner for more than 3 years, Leoni the Zebra Shark hatched three eggs by herself. Shark embryos have developed without fertilization.

“In April 2016 Leonie hatched three eggs, despite having no access to a mating partner for three mating seasons. We thought she could be storing sperm but when we tested the pups and the possible parent sharks using DNA fingerprinting, we found they only had cells from Leonie” explained Dr. Christine Dudgeon of UQ’s School of Biomedical Sciences, who documented the change.

In her research paper, recently published in Scientific Reports, in a collaboration with UQ’s Dr. Jennifer Ovenden and Reef HQ, she explained how they used DNA genotyping to report the first demonstration of an intra-individual switch from sexual to parthenogenetic reproduction in a shark species.

They have reported the first occurrence of an intra-individual switch from sexual to parthenogenetic reproduction in a shark species, the zebra shark Stegostoma fasciatum. 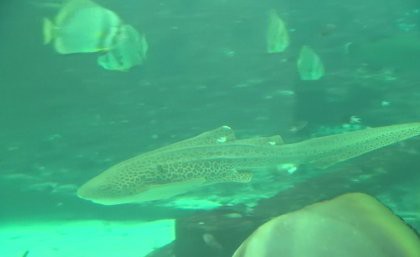 A natural form of asexual reproduction in which embryos develop without fertilization is called parthenogenesis. It is commonly found in plants and invertebrate organisms. Some shark species can reproduce without mating partner too.

But Dr. Dudgeon said that none with recorded sexual mating history had ever made the change to asexual reproduction. This particular event is extremely important in understanding shark’s reproductive system, especially zebra sharks, wich is identified as an endangered species.

“This has big implications for conservation and shows us how flexible the shark’s reproductive system really is,” Dr.Dudgeon said.

“Leonie adapted to her circumstances and we believe she switched because she lost her mate. What we want to know now is could this occur in the wild and, if so, how often does it? One reason why we haven’t seen it before could be because we haven’t been looking for it. It might be happening in the wild but it’s never been recorded in this species before.”

Dr. Dudgeon further studies will focus on Leoni’s pups until they reach maturity. Then she and her team will be able to comprehend whether these asexually produced zebra sharks could have pups of their own with a male partner.