Southern California residents should remain on heightened alert until Tuesday for the increased possibility of a major earthquake, officials said.

The warning by the Governor’s Office of Emergency Services follows a series of small temblors deep under the Salton Sea, which is located on the 800-mile-long San Andreas fault, the Orange County Register reported Saturday.

The alert, which remains in place until October 4, came after the swarm of quakes, ranging from magnitude 1.4 to 4.3 according to the US Geological Survey, occurred at the southern end of the San Andreas Fault.

A statement from the governmental group warned that “stresses associated with this recent earthquake swarm may increase the probability an additional earthquake as large, or larger, than the September 26 magnitude 4.3” which hit Salton Sea – the most powerful of 200 quakes to shake the region in the last week.

“There is significant stress stored on the southern end,” said Morgan Page, a geophysicist with the USGS. Earthquake Science Center. 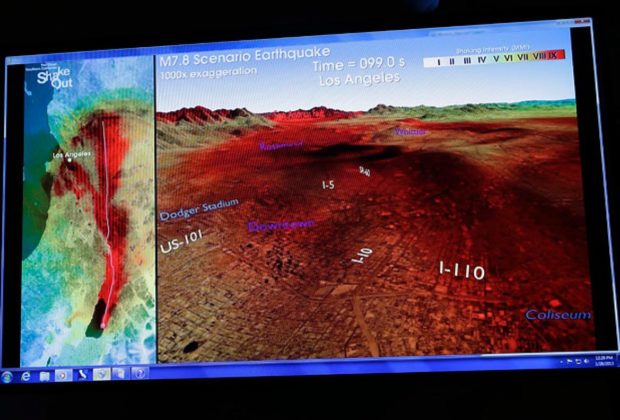 Used in a presentation to promote a new California measure to fund an $80 million early warning system, this graphic shows the progression of earthquake shockwaves along the Andreas Fault, from the Salton Sea to downtown Los Angeles. (REED SAXON/AP)

Gov. Jerry Brown on Thursday signed legislation to develop a statewide warning system to inform Californians of impending earthquakes through their cellphones, radios and other devices.

“California is earthquake country,” said Mark Ghilarducci, the director of the state’s Office of Emergency Services. “We must always be prepared and not let our guard down.”