Home
news
Look up for Venus in The Sky Tonight!

You have surely noticed a starlike, dazzlingly brilliant lantern in the Southwestern sky these days. That dazzling sparkle is actually the brightest planet of our solar system – Venus. Grab your telescope or even binoculars to observe this magnificent view on January 12 after sunset and January 13 before dawn.

Venus will be shining brightly at mag -5.1. You can’t miss it because it is the third brightest object in our skies, right after the Sun and the Moon.

You have only a few hours after sunset to observe it since it will slowly sink towards the horizon. It is easier to view it by the telescope in a daytime or twilight sky because the glare of this planet itself can be overwhelming during the night.

The best view of Venus – once every 1,6 year

Why observing it particularly tonight? Because Venus reaches a milestone in its appearance in our sky tonight, known as the greatest eastern elongation. At this point, this bright planet reaches its greatest separation from the Sun, occurring so bright and conspicuous. The Venus’ angular separation from the Sun will be 47 degrees, placing this bright planet in fine view in the western twilight sky. 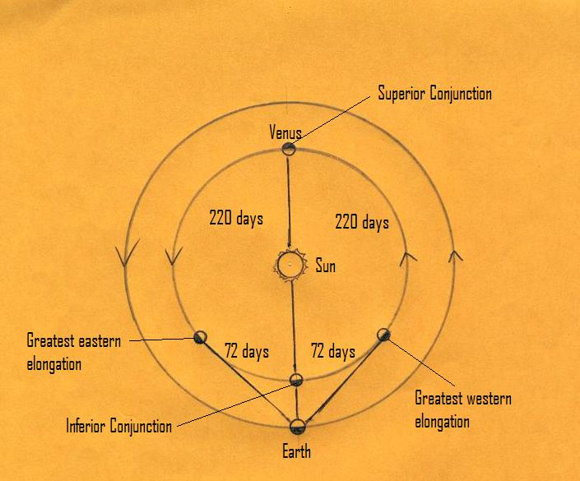 Earth and Venus orbit the sun counterclockwise as seen to the north of the solar system plane. Venus reaches its greatest elongation in the evening sky on January 12, 2017. Source: Earthsky

Venus is very difficult to observe most of the time of the year. That’s because its orbit lies closer to the Sun than the Earth’s so it always appears close to the Sun.

After the greatest elongation, the distance between Venus and the Sun will decrease each night. Eventually, the planet will sink back into the Sun’s glare.

This planet reaches its greatest evening elongation once every 1,6 year or approximately 5 times every 8 years. The next greatest elongation will be on 17, August 2018.

Mars and Neptune visible tonight too

Tonight’s sky is surely spectacular for all skywatchers. Not just full Moon and Venus are visible, but Mars and Neptune too!

Look up for Mars just above Venus, occurring as the dim orange light.

Gas Giant Neptune and Venus are in conjunction, appearing only about a one-half degree (the moon’s diameter) apart. For North American observers they’ll appear closest this evening, about 0.4° apart, with Neptune to Venus’s lower left.

You always need an optical aid to spot Neptune, and maybe it will be hard to spot it in Venus’ glare tonight. But, it is surely challenging. If you succeed it will be possible to get both planets in the same telescope field of view.

Venus presently lies in the constellation of Aquarius. Bright star Lambda Aquarii in Aquarius constellation (also known as Hydor) will be visible too, despite the Venus’ glare.

Try this interactive map which can help you find planets and stars more easily.