A big chunk of sea ice size of Alaska is now missing from the Arctic, according to data released by the National Snow and Ice Data Center.

Both the Antarctica and the Arctic are heading for a delayed, but devastating response to climate change. They have experienced the record lows in sea ice extent in November, due to unusually high air temperatures and a warm ocean. 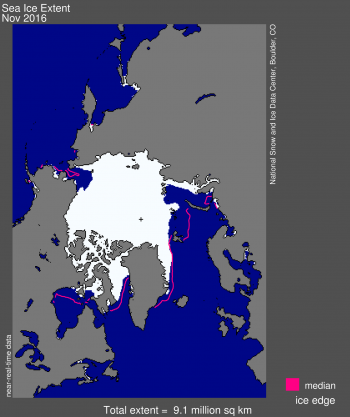 Arctic sea ice follows a seasonal cycle. That means its frozen surface expands during the winter and recovers its losses caused by summer temperatures. This year at first, ice began to grow like usual, though it stayed well below normal week after week. But then, in mid-November, the sea ice began to decline and the sea ice area dropped by 19,300 square miles (50.000 square kilometers).

This unusual cold-season dip in sea ice extent was caused by persistent southerly winds pulling in warm air and warm ocean waters that kept sea ice from forming in the Barents Sea, an area north of Scandinavia and eastern Russia, reports NSIDC.  “Typically sea ice begins to form in the fjords at the beginning of November, but this year there was no ice to be found,” said NSIDC scientist Julienne Stroeve.

“Arctic sea ice plays an important role in maintaining Earth’s temperature—its bright white surface reflects solar energy that the ocean would otherwise absorb. But this effect is more relevant in the summer, when the sun is high in the sky in the Arctic, than in the winter, when the sun doesn’t rise for months within the Arctic Circle. In the winter, the impact of missing sea ice is mostly felt in the atmosphere”, said Jennifer Francis, a climate scientist at Rutgers University in New Brunswick, New Jersey.

She explained how in places where sea ice has been lost, those areas of open water will put more heat into the atmosphere because the air is much colder than unfrozen sea water. As winter sea ice disappears, areas of unusually warm air temperatures in the Arctic will expand. These are also areas of increased evaporation, and the resulting water vapor will contribute to increased cloudiness, which in winter, further warms the surface.

The scientists think that this is something we might expect to see more of in the future. And certainly, none of this has positive implications for the fate of humanity, indigenous communities and wildlife across both The North and South pole.