The Brownlee brothers did not win the World Championships Triathlon Sunday in Mexico, but they did finish in a dramatic fashion.

Jonathan Brownlee, 26, the younger of the two British triathletes, was leading the final race of the championships and about to win the title of world champion when he began to weave over the road in hot and humid conditions in Cozumel.

He was overtaken by the South African Henri Schoeman, who won the race.Jonathan’s brother, Alistair Brownlee, 28, in third place, saw his brother struggling and helping him to the finish line.

Second in the race, Jonathan Brownlee did not score enough points to climb in the overall lead. It is the Spaniard Mario Mola, 5th in the race, who won the title of world champion, with only 4 points ahead of the Briton .

Dehydrated, it is from his hospital bed that the silver medalist Rio Games thanked his brother, not without humor. 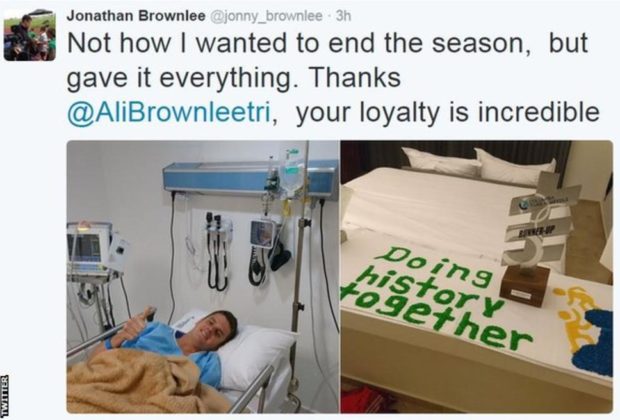 Alistair said it was “a natural human reaction” to come to the aid of his brother, adding: “I’d have done the same thing for anyone in that position.”

He added: “I wish the flippin’ idiot had paced it right and crossed the finish line first.

“He could have jogged that last two kilometres and won the race.

“You have to race the conditions. I was comfortable in third. I raced the conditions, I took the water on, made myself cool and I was all right.”