Home
news
Can we soon grow potatoes on Mars?

Will mankind be able to grow potatoes on Mars? Although people have not set foot on Mars, lettuce has been tasted by astronauts .In the Hollywood science fiction movie “The Martian,” Matt Damon survived on the Red Planet be growing potatoesfor more than 500 days while awaiting rescue.

On Tiangong 2, China’s first space laboratory that was established in September, an experiment is underway to grow rice and thale cress (Arabidopsis thaliana), a type of vegetable. Chinese scientists expect the plants will undergo the entire cycle. Scientists are keen to understand whether plants in space can grow. Despite the fact that there isn’t any differentiation between down and up, day and night and distinct seasons according to an Earth-established cycle, reseachers believe it’s possible.

“So far, the plants on Tiangong 2 have been growing nicely. Some Arabidopsis thaliana are flowering, and the rice is about 10 centimeters tall,” Zheng says. 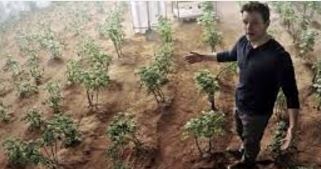 When the two Chinese astronauts who flew the Shenzhou 11 spacecraft to the space laboratory on Oct 17th returned to Earth after in November, they’ll bring back samples of the Arabidopsis thaliana, which is anticipated to produce seeds in space, says Zheng.

The rice experiment will continue on Tiangong 2 for about half a year.
If people need to investigate the universe, scientists say, the growth of environmental and life support systems is vital to supply food and the needed oxygen for long-duration space tasks.

Harvesting will be an integral job, if people need to create bases on the moon or Mars. But so far, there isn’t any successful case of growing plants in an entirely enclosed environment desired on Mars or the moon.
“We cannot prevent the problem of growing crops and vegetables, if we should live on Mars.

“If we can run research on Mars, potatoes are an excellent option. We could also attempt growing tomatoes, cucumbers, rice and wheat,” Zheng says.