Home
news
Why Do We Get Chills When We Are Not Cold?

Have you ever wondered why your hairs stand up when you hear your favorite song? Even if you’re not cold or scared, you get chills and your skin gets the “goosebump”. People often feel chills down their spine and get goosebumps when they experience something of great personal significance, particularly when it comes to art. Our body can react in the most strange way when we’re facing a strong esthetic experience.

So, is there a connection between these strong emotions and body chills? Why do such seemingly unrelated events cause the same body reaction?

William Griffith, professor and head of the Department of Neuroscience and Experimental Therapeutics at the Texas A&M College of Medicine, said goose bumps are a normal biological response to powerful emotions from dramatic or stressful situations linked to fight-or-flight.

“Fight-or-flight is in response to something, typically being scared, shocked or encountering a predator, that prepares us to fight or flee,” Griffith said. “It’s part of an adrenaline reflex.” Fight-or-flight is a part of peripheral nervous system response that is automatic. That means it’s not consciously controlled and body is reacting in a certain way without you even thinking about it.

Actually, the goosebumps are phenomenon inherited from our animal ancestors, which is not quite useful for us today. When we get cold or scared or dealing with the strong emotions, such as anger or excitement, our brain sends signals to miniature muscles that make them tense up. The contraction of these muscles causes the hair attached to muscles to stand up. And they also pull your skin up just a bit, creating goosebumps. They’re called goosebumps because your skin looks like the skin of a goose or a chicken whose feathers have been plucked out when it occurs on your skin.

When we are scared or feeling cold, our brain sends the information to the miniature muscles to contract. Source:sites.psu.edu

The reason for all these responses is the subconscious release of a stress hormone known as adrenaline. This reaction actually begins in the amygdala, a part of the brain which has a primary role in the processing of memory, decision-making, and emotional reactions. The reaction in amygdala triggers the nearby hypothalamus, which links the nervous system to the hormone-producing endocrine system, to secretes a substance called adrenocorticotropic hormone (ACTH).

The next automatic reaction is the secretion of adrenaline, which is produced in the small, beanlike glands, called the adrenal glands, placed just above the kidneys. These chemical releases produce the steroid hormone cortisol to increase blood pressure and blood sugar and suppress the digestive and immune systems in response to stress. Then the body activate a boost of energy that prepares the muscles for reaction to the potential threat. 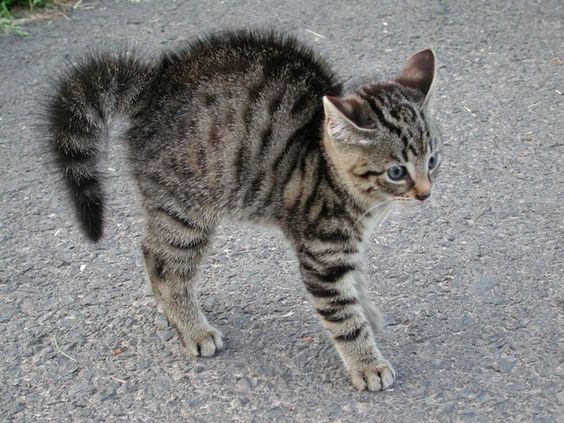 The cat’s hair stand up when she feel threatened. It is called pilomotor reflex.

This reaction is called pilomotor reflex and it makes the animals look bigger and make them seem more intimidating when threatened. It also brings the warmth into their body. When an animal feels cold, the hairs raise to thicken the fur’s insulation and preserve more of the body’s heat.

“Humans don’t necessarily have the ability or need to manipulate their body hair in such a way like our ancestors,” Griffith said,”but the trait still remains in our DNA, whether that adrenaline release is prompted by an uncanny environment or a sensational song.”