Scientists have uncovered one of the largest-ever dinosaur footprints, measuring just over 1 meter in length and 0.77 m in width. The print was found in Mongolia’s Gobi Desert.

As reported by hte AFP, it is not an indentation but a cast, formed in what was probably the footprint of a plant-eating sauropod similar to Titanosaurus, according to researchers from Okayama University of Science who worked alongside Mongolian researchers.

The giant print measures 106cm (42in) long and 77cm (30in) wide, according toAFP. It is thought to have belonged to a titanosaur, a group of giant, long-necked herbivores. Researchers said the creature may have been more than 30 meters (98ft) long and 20 meters (66ft) tall. 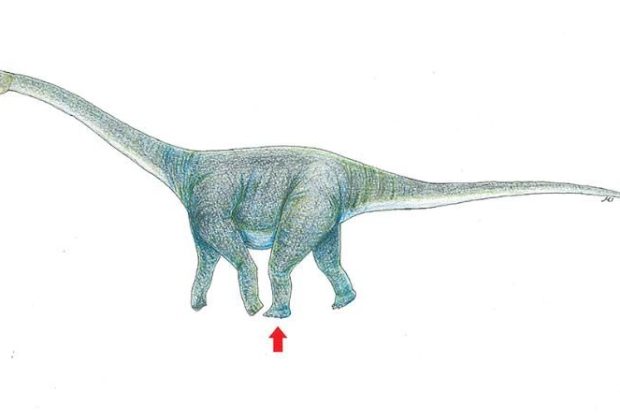 A drawing illustrating the dinosaur that may have left a footprint in Mongolia’s Gobi Desert CREDIT: OKAYAMA UNIVERSITY OF SCIENCE

The print was discovered in August in a geologic layer formed between 70m and 90m years ago by researchers from Okayama University of Science and the Mongolian Academy of Science.

“This is a very rare discovery as it’s a well-preserved fossil footprint that is more than a metre long with imprints of its claws,” a statement from Okayama University of Science read, according to AFP.

“A whole skeleton of a giant dinosaur that left such a massive footprint has yet to be uncovered in Mongolia,” professor Ishigaki told the Asahi Shimbun. “A fossilised skeleton of such a dinosaur is expected to be eventually discovered.”

“Footprints are living evidence of dinosaurs,” Masateru Shibata, a researcher with the Dinosaur Research Institute at Fukui Prefectural University, told the Japanese daily.

“There is a lot of information that can be obtained only from footprints, including the shape of dinosaur feet as well as the ways in which they walked.”

According to the Telegraph, Titanosaurs were the most diverse and abundant large-bodied herbivores in the southern continents during the final 30 million years of the Mesozoic Era.