According to the scientists’ estimates, The Utah’s Great Salt Lake is shrinking. The volume of water in The Great Salt Lake has shrunk by 48% and the lake level has fallen 11 ft (3.4 m) since 1847. Both nature and men have a hand in change, stated NASA.

The Great Salt Lake is the largest salt-water lake in the Western Hemisphere, and the eighth-largest terminal lake in the world. The lake has three major tributaries the Jordan, Weber, and Bear and has no outlet than the evaporation.

This massive lake is a key to the state’s economy and identity. The high salinity in the lake makes it uninhabitable for all but a few species, including brine shrimp, brine flies, and several forms of algae. The lake is their prime habitat since they are extremely resilient to salt. But as lake level drops and water becomes saltier, there is a huge threat even for those creatures. Also, more than 250 species of migratory birds feast on the brine shrimp and flies that thrive there.

Decreasing water levels in the Bay not only affect the ecology and biodiversity of the area, but it also affects local people who harvest the shrimp and extract salt. But, did they cause the problem themselves?

Back in the middle of the 19th century, when pioneers first arrived in the area, the lake spread across roughly 1,600 square miles (4,100 square kilometers). In October 2016, the lake reached its lowest recorded level: 4,191.2 feet (1277.5 m). NASA satellites images captured on September 20 show a drastic change on the Lake’s surface area. More than three-quarters of the lake bed is now exposed in Farmington Bay, an area that is home to diverse wildlife.

More than 150 years people have been exploiting the lake’s water for farming, industry, and human consumption. But the problem is that they take more water out of the Salt Lake than it flows into it. They are now diverting about 40% of the river water. Water levels have always fluctuated, but they have been dropping steadily since 2011. 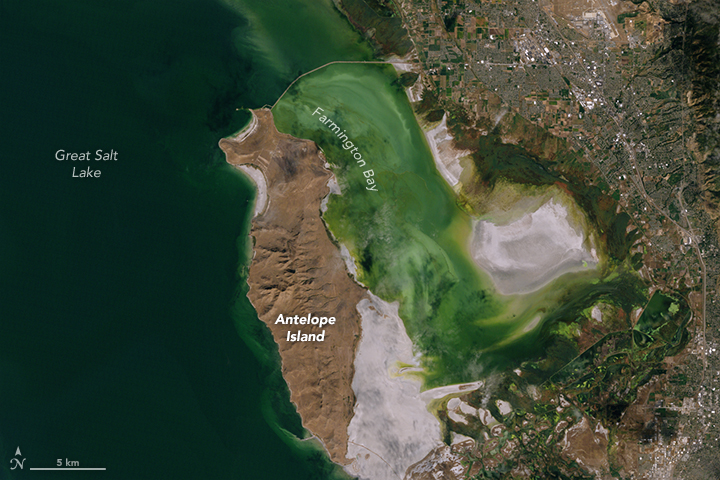 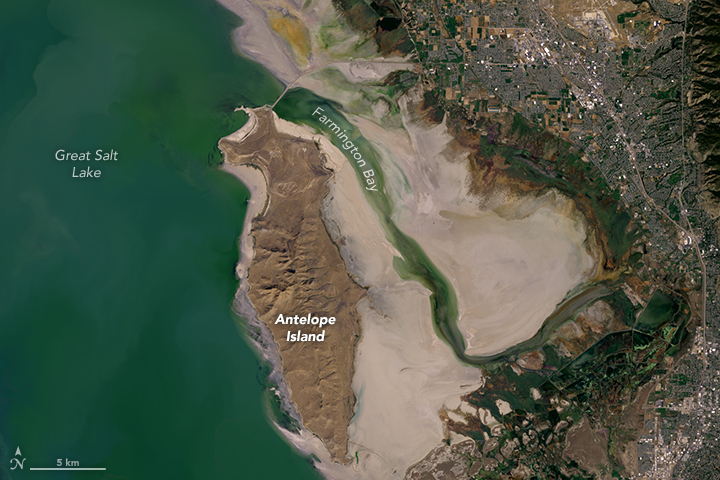 Wayne Wurtsbaugh, who studies watershed sciences at Utah State University, and his colleagues released the white paper in February 2016, describing the impact of water development on the Great Salt Lake. “Farmington Bay has been nearly desiccated as the result of the combined effects of drought and water withdrawals from the rivers feeding the lake,” said Wayne Wurtsbaugh.”The solution to the water issue is greater conservation, particularly for agricultural irrigation,” he explained.

The scientists think the hardest work will be convincing farmers to do more with less, as approximately 63 percent of the water usage goes to agriculture.

Researchers and environmental groups are also concerned about future plans for the development of seven dams along Bear River.

But last year, legislators approved spending $1.5 million to dredge the lake next year, which will add an additional 6 to 8 feet (1.83 to 2.44 meters) and create a passable channel for boats. It has been also considered to put efforts to remove an invasive weed that sucks up a large water area.

Even with conservation efforts and more ecologically conscious development, the lake could continue to diminish due to climate change, the researchers said.

“A wild card for the fate of the lake is what global climate change may do to the basin,” Wurtsbaugh said. “Warmer air temperatures are projected to lower runoff, but our data shown in the white paper suggests there haven’t been climate change effects on the runoff yet.”

The region around The Great Salt Lake is typically hot and dry during the summer and generally gets precious little rainfall this time of year.