A Koala bear and a butterfly have won thousands of hearts across the internet.

Koala joey Willow was being filmed by Kevin Fallon at the Symbio Wildlife Park in Sydney for a sustainability video when she spotted a butterfly that had been placed on to a nearby branch.

When Willow climbed over to take a closer look, the butterfly also decided to move nearer and landed on her face.

Staff at Symbio Wildlife Park, on the New South Wales coast, were filming Willow the koala when she reached out to grab the butterfly, which flew on to the marsupial’s head before resting on her nose. 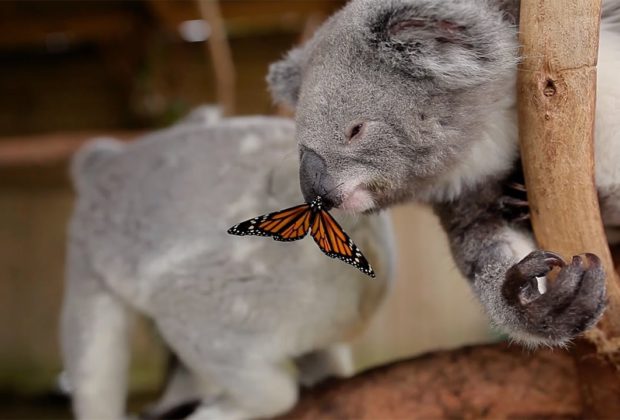 The resulting video shows the young koala staring in confusion, closing her eyes and moving her head in an apparent attempt to get a better look at the insect.

“We had always planned to have a butterfly on a flower, with the koalas in the background, as one of those iconic little bits of footage for the introduction of the sustainability video,” Mr Fallon told the ABC.

“But when we actually put the butterfly on the flower, Willow came running over and starting getting really inquisitive, nuzzling up to it.

“Before we knew it, it actually flew onto Willow’s head and then stayed there for ages.

The video, uploaded last week with a tagline “the cutest thing you will ever see”, has been viewed more than 3.2 million times on Symbio’s Facebook page.