Home
news
How long will the Sun last?

The sun, being the most important source of energy on earth, is the star at the center of the Solar system. It has a diameter of about 109 times that of the earth with a mass of about 330,000 times that of the earth. Three quarters of its mass is (~73%) hydrogen while the remaining is helium and smaller quantities of oxygen, neon, iron and carbon. It is estimated that it was created 4.6 billion years ago.

So how was the Sun Born?

Nebular Theory estimates that the solar system came into being as a result of giant cloud of molecular gas & dust. At about 4.6 billon years ago, the cloud collapsed, which cause the gravitational collapse of this cloud. After this enormous collapse, pockets of gas and dust started to collect into denser regions while the conservation of this momentum caused it to rotate and increasing pressure that made it heat up. The theory elaborates that most of these material sended up in a ball at the middle while some matter flattened. After flattening, it formed a disc that surrounded the ball. The ball then formed the sun while the disk with the flattened material formed the planets. It is interesting to note that the sun was a collapsing protostar for 100,000 years before huge temperatures and high pressures in its interior ignited and created enormous fusion at its center. The sun then began as a T Tauri Star which blasted out solar wind. This is how its life cycle begun.

Precise calculations find the lifetime of the sun to be 10 billion years. Currently, the sun is estimated to be 4.6 billion years old. So it basically has another 5 billion years before exhausting its energy. Like any other star in the universe, the sun is at its main stage in life. During this stage, nuclear fusion reactions in the core convert hydrogen to helium. Each second, upto 600 million of tons of matter get converted into neutrinos as well as solar radiation and roughly 4 x 1027 Watts of energy. So for 4.6 billion years, the sun has all along been generating energy this way.

Preparation for its Death 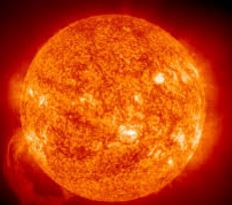 As the sun generates energy through nuclear fusion, the process can’t last forever. This is because there is only a finite level of hydrogen present in its core. By now, the sun has since converted upto 100 times the earth mass into helium and solar energy. Fundamentally, as more hydrogen gets converted into helium, the core shrinks. As the core shrinks, the outer layers move nearer to the center, making them to experience a greater gravitational force. As this happens, more pressure it rested on the shrinking core and making the sun even brighter and hotter. In about 1.3 billion years from now, it is also estimated that the sun will be 30% times hotter than today. As the fusion further occurs, the sun will deplete its hydrogen, causing the inert helium ash to collapse, causing the core to heat up, expand and become larger. It will become unstable and start losing mass through thermal pulses.

The Final Death of the Sun

The sun has 5 billions years before its eminent death. The assumptions made in this model are that the sun is neither shrinking nor expanding and that the luminosity of the sun has not changed, neither is it going to change.