If a mantis shrimp, a well-known arthropod, had the ability to speak, it would probably be able to look at a human body and give a precise diagnose for cancer faster than any mean available for modern medicine. This poorly understood predator lives in shallow, tropical and subtropical marine habitats.

Scientists are developing a machine able to imitate the eyes of this sea animal and improve the diagnosis of cancer cells in patients. The stomatopod, known as “mantis shrimp”, is extremely aggressive. It destroys its preys with an enormous strength, that can vaporize water molecules with its hits, 30 times faster than a blink of eye. Mantis shrimps most hunted preys are snails, crabs, mollusks and rock oysters. Their blunt clubs enable them to crack the shells of their prey into pieces.

Besides being strong, it is extremely precise, due to its peculiar eyes, that work similarly to the eyes of flies. Scientists in Australia discovered some years ago that this species has composite eyes. The organs are formed by ommatidium, or plaques of vision. Each of these plaques receives light from a certain different point, and the result is a mixture of all these combinations. Different from humans, they don’t have a centered vision. The con is that they see in low resolution; the pro is that they detect faster movements, also polarity of light. That explains why it is so hard to a kill a fly. For the same reason, they might be able to detect cancer cells.

Human eyes are incapable of perceiving the difference between polarized light and non-polarized. Yet, this shrimp’s eyes have extra sensors able to analyze the angle of each light separately, thus distinguishing these different types of light, something that is essential for an animal that lives undersea. In the sea, for example, surfaces with scales, that reflect polarized light, are highlighted from the bottom of the sea. Knowing this difference is essential to this shrimp’s survival. Their eyes also enable them to recognize different types of coral, prey species, which are often transparent or semi-transparent, even predators, such as the barracuda, which have shimmering scales.

Besides perceiving light polarization, this animal also emanates pulses of polarized light. And that is exactly where cancer diagnosis come in. Cells with malignant tumor reflect polarized light strangely. Easily distinguishable from healthy cells. The difference, imperceptible for humans, would be easy to detect by mantis shrimps. What the scientists didn’t know is that, before the tumor starts to manifest its first symptoms, cancer cells have already started behaving strangely to pol 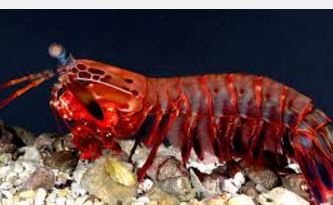 Therefore, many scientists all around the world are trying to develop ways to imitate composite eyes of arthropods to detect cancer cells earlier than ever. If polarized lights can reveal where cancer cells are located, surgeons will be able to differentiate healthy cells from tumor cells easily, and make sure they remove the exact right sick cells and leave behind the healthy ones.

Scientists are attempting to, not only increase the efficacy of cancer diagnosis, but also to make surgeries to remove tumors and carcinogenic cells more precisely. The first trials are developed by Washington University, in Saint Louis. The prototype is already under clinical tests with cameras serving to detect mammal cancer.