Home
news
NASA and Stephen Hawking collaborating on a nano-starship

Space travels and space exploration are becoming so close to realization. NASA and Stephen Hawking collaboration are aimed at creating a nano-starship that can travel 1/5th the speed of light. As in every research, there are obstacles that need to be overcome. Scientists have to figure out how to minimize the cosmic radiation impact on the craft. NASA presented many development options for the starship in an animation.

The star of the show is the interstellar spacecraft of a new generation, called “StarChip”. If the research goes as planned, the ship could reach Earth’s closest star system, Alpha Centauri, in 20 years. Stephen Hawking announced the project in April and teamed up with scientists from the Korea Institute of Science and Technology.

The question is, could the nano-starship survive a two-decade-long trip?

This problem might have the solution in NASA’s research. Their researchers advise caution because high-energy radiation in space could cause the ship to cease performance. And all this well before the 20-year trip was over.

NASA presented their solutions at the International Electron Devices Meeting in San Francisco this week. They suggested some options that can be implemented during the development stages of the project.

First, adjust the route of the flight to avoid those high-radiation areas.

Second, the ship could be built with protective shielding on the electronics.

Third, NASA researchers proposed a silicon chip that would repair itself. 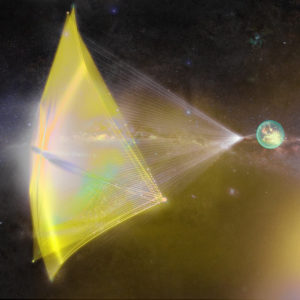 “On-chip healing has been around for many, many years,” NASA team member Jin-Woo Han said in the presentation. Nevertheless, the research is still only theoretical. There are many major issues in interstellar travel to focus on and deal with.

“The limit that confronts us now is the great void between us and the stars,” Mr. Hawking said in April. “But now we can transcend it. With light beams, light sails, and the lightest spacecraft ever built, we can launch a mission to Alpha Centauri within a generation. “Today, we commit to this next great leap into the cosmos because we are human, and our nature is to fly.”