The periodic table of the elements now has 4 more elements, the International Union of Pure and Applied Chemistry (IUPAC) officially confirmed.

After a 5 month period of review, the names of four elements are finally approved by IUPAC Bureau. Here are the four elements, their symbols, and origins of their official names:

Nihonium (Nh), 113, named after the Japanese word Nihon, which means Japan;
Moscovium (Mc), 115, gets its named from Moscow, which is near the Joint Institute for Nuclear Research;
Tennessine (Ts), 117 named after the state of Tennessee, the location of Oak Ridge National Laboratory;
Oganesson (Og), 118, named after Yuri Oganessian, who helped discover several superheavy elements.

These newly discovered superheavy and highly radioactive elements now complete the 7th row of the periodic table of elements. 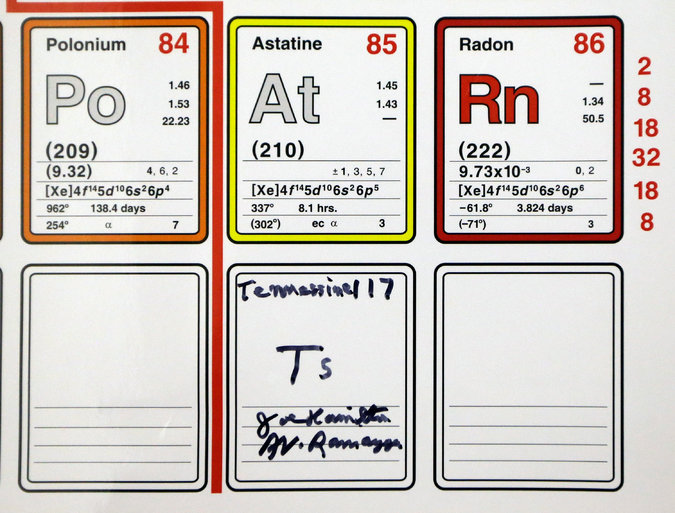 An entry on the periodic table of the elements filled in and autographed by physics professors Joe Hamilton and A. V. Ramayya is displayed at Vanderbilt University in Nashville, Tenn. Their research team discovered a new element and named it tennessine after Tennessee. Source: AP

Scientists first synthesized these elements between 2002 and 2010, but 5 years later the IUPAC officially recognized the discoveries. In June this year, the scientists who discovered them sent IUPAC their suggested names.

“The names reflect the realities of our present time”, said IUPAC President Prof Natalia Tarasova, “it reflect the universality of science, honoring places from three continents, where the elements have been discovered – Japan, Russia, USA – and the pivotal role of human capital in the development of science, honoring an outstanding scientist – Professor Yuri Oganessian”.

During the 5-month of reviewing, there was a huge interest of the public for this topic. They have even suggested names, but these suggestions could not be accepted since it’s the tradition that only the discoverers have the right to propose names and symbols. Keeping with tradition, the names are given after a mineral or similar substance, a place or geographical region, a property of the element, or a scientist.

So, suggested names like Lemmium and Godzillium, can rest for now, just like the names of periodic table’s seventh-row placeholders ununtrium, ununpentium, ununseptium, and ununoctium.