An extinct reptile related to crocodiles that lived 212 million years ago in present day New Mexico has been named as a new species, Vivaron haydeni, in a paper published this week by Virginia Tech’s Department of Geosciences researchers.

Leading the paper that names the previously unknown animal is undergraduate researcher Emily Lessner, of Kennett Square, Pennsylvania, a double major in the departments of Geosciences and Biological Sciences, both in the Virginia Tech College of Science. Lessner’s paper detailing the fossil of the animal – jawbones, other skull fragments, and hip bones – appears in this week’s open science journal, PeerJ.

Vivaron haydeni was found in Ghost Ranch, New Mexico, in 2009 during an excavation co-led by Sterling Nesbitt, then a postdoctoral researcher at the University of Texas at Austin, and now an assistant professor of geosciences at Virginia Tech. Some of the fossils remained sealed in protective plaster jackets until 2014, when they were transported to Blacksburg for study. That’s where Lessner enters. 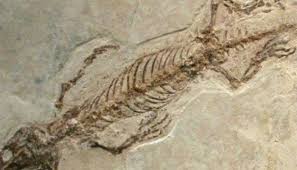 At the time a sophomore majoring in biological sciences with a minor in geosciences, she was seeking an independent research experience that piqued her interest and provided a challenge. She found it with the Paleobiology Research Group in Derring Hall.

Nesbitt had not arrived on campus yet but was looking for students interested in conducting research projects. When Lessner heard of the opportunity and the chance to work with Nesbitt and Michelle Stocker, also a newly arriving paleontologist in the college, Lessner jumped at the chance.

“Initially, I cleaned fossils in the lab and worked on a project reconstructing soft tissue structures using computed tomographic, or CT, scans on the computer,” said Lessner, now a senior. “I began looking at Vivaron pretty soon after.”