TORONTO – (THE CAMPING CANUCK) – Scientists need a little help finding a ‘one in a million’ snail a mate.

A garden mollusc, named Jeremy, looks like any other snail to the naked eye, but has been dubbed a “one in a million find” as it is the mirror image of how other snails appear.

Jeremy the snail was found in a compost heap in south west London but now resides in the lab of University of Nottingham’s life sciences department. His shell spirals in an anti-clockwise direction meaning it is unable to mate with more common snails whose shell spiral in the opposite way.

Professor in evolutionary genetics, Dr Angus Davison from the University of Nottingham is hoping to find a mate for Jeremy in a bid to discover more about the creature’s genetics.

Dr Angus Davison said: “This really is an exciting find – I have been studying snails for more than 20 years and I have never seen one of these before. 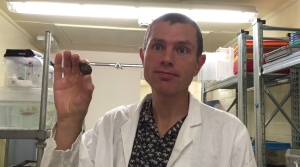 Angus Davison is an associate professor of evolutionary genetics and Jeremy the snail’s match-maker. (University of Nottingham)

Scientists will map the snail’s entire genome for clues to the genetic disorder. Dr Davison hopes Jeremy will have baby snails, as those with the same shell pattern, and without, will be easier to examine for the genes which cause this, reports the Daily Mail.

Dr Davison added: “Snails are hermaphrodites meaning that if they want to they can reproduce on their own without the need for another mate. However, they don’ t really like doing this and from our perspective, the genetic data from offspring of two lefty snails would be far richer and more valuable to us.”
To get involved with the search you can contact Dr Davidson at the University of Nottingham.