The Antikythera mechanism is considered the world’s oldest computer, the device so advanced for its time that many doubt it dates back 2 millennia. This impressive device still remains one of the most intriguing objects in the history of technology.

In 1901, sponge divers found the Roman shipwreck near the tiny island of Antikythera, between Crete and the mainland of Greece. They’ve found many artifacts: bronze and marble statues, luxury glassware, coins, ceramics, and jewelry. But they also discovered something they couldn’t explain: A bizarre corroded clockwork-like mechanism made of bronze, in the form of a disintegrating lump placed in a wooden container size of a shoebox.

The wooden box eventually disintegrated, and the bronze piece was discovered it had 3 main and 82 smaller fragments, which consisted of many gears. But the mechanism was ignored until 1951 and its importance wasn’t recognized for 75 years.

The first publication on the Antikythera mechanism was made in 1974 by physicist and historian Derek de Solla Price. But Price dies in 1983 without having figured out how the device actually worked. For decades, scientists could only guess about the use of the mechanism because it was too fragile to examine by hand. 3-D scanning and x-ray analysis have allowed scientists to see the many working parts of the machine and read the inscriptions that once covered the outer casing of the machine.

Antikythera mechanism is now known to be a device to calculate the movements of stars and planets. This astronomical calendar was capable of tracking with remarkable precision the position of the Sun, the phases of the moon, moon eclipses, the movements of Mercury, Venus, Mars, Jupiter and Saturn (planets known at the time), and was able to record important dates in Greek calendar such as the Olympic Games. Astronomer Professor Mike Edmunds of Cardiff University said at the time: ‘It is more complex than any other known device for the next 1,000 years. The astronomy is exactly right … in terms of historic and scarcity value, I have to regard this mechanism as being more valuable than the Mona Lisa.” 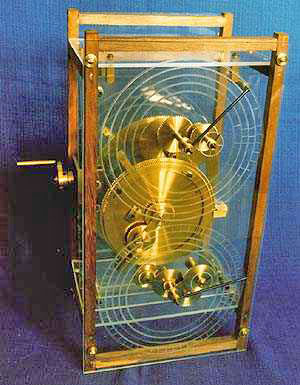 A full-scale reconstruction of the Antikythera mechanism. Source: bibliotecapleyades

It has been estimated that the Antikythera mechanism dates from around 87 B.C and was lost in 76 B.C. But no one is really sure about who actually made it and why or how it came to be on that ill-fated cargo ship. The ship was Roman though the device was developed in Greece. One theory suggests that the reason it came to be on the Roman ship could be because the instrument was among the many war treasures of Julius Caesar.

Some researchers suggest it was made to be used in one of the Corinthian colonies in northwestern Greece or Sicily, precisely the island’s city of Syracuse which was home to Archimedes, the greatest scientist of antiquity. “In the first century B.C. Roman statesman Cicero tells how in 212 Archimedes was killed at the siege of Syracuse and how the victorious Roman general, Marcellus, took away with him only one piece of plunder—an astronomical instrument made by Archimedes. Was that the Antikythera mechanism?” mathematician, filmmaker, and Antikythera mechanism researcher Tony Freeth wonders.

The full extent of the instrument’s functions remains a riddle for scientists from all over the world, and they are little pessimistic when it comes to solving the Antikythera mechanism’s mystery. The missing pieces of the device are so tiny and hard to find, so the scientists think the chances of finding them are very slim, but not impossible.

The Antikythera mechanism is currently housed in the Greek National Archaeological Museum in Athens.