A Lumberton woman has an incredible story.

Joni Gaddy was rescued by her son and nephew Tuesday from neck-high water after she has been trapped in her home since Hurricane Matthew hit Saturday.

She said her house and car were destroyed when floodwaters began to rise around her home on Chickenfoot Road.

Her son, a truck driver, drove all the way from Texas, worried about his mother, reports CNN. 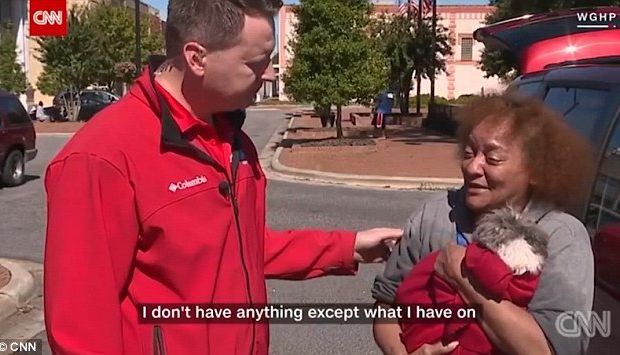 Gaddy said she saw alligators and snakes swimming outside her home and she prayed they wouldn’t get inside.

She said she just kept praying that someone would come and get her. She said she heard helicopters flying near her home, but none ever flew directly over her home.

She had hung sheets out of the windows to try to get someone’s attention.

Joni Gaddy lost everything thanks to the alligators

Gaddy lost everything and escaped with just the clothes on her back, she didn’t even have shoes.

She was only able to rescue one of her dogs, the other was still in the house.

She said she doesn’t think she will be able to return to her home of 27 years – or that she would even want to. “I just don’t think I can.”