2030: The Next Ice Age?  It has been several thousand years since the last Ice Age hit our planet, wiped off a number of species and totally changed the Earth’s surface. With climate change becoming a huge issue across the world, many wonder when the next Ice Age would strike. Could it be sooner than we think or are we just getting ahead of ourselves?

Before we delve deeper into this subject, let us first explore the facts surrounding this phenomenon. What happens during an Ice Age? Why does it happen? Is there no way out of it?

In summary fashion, Ice Age begins when the Earth changes its orbit and results into minimal sunlight on the northern hemisphere. The ice sheets up north gradually spread during summer. The spreading continues for thousands of years, making the Earth colder and disrupting its normal temperature. After the cooling reaches its peak, the planet enters into another Ice Age

The Earth sinking into an Ice Age is a natural phenomenon. Our planet simply has a habit of occasionally cooling down. Warm intervals occur every 100,000 years and remain for a period of 11,000 years before the cold sets in. For the past 400,000 years, this has been the Earth’s reality. The situation could be delayed or fast tracked depending on the activities of the human population. 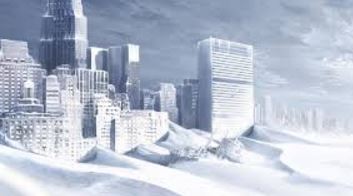 Seeing how long the process will take, the next Ice Age may not occur anytime soon. However, some conspirators believe otherwise. According to a new solar cycle model that provides more accurate assessments of the sun’s behavior, solar magnetic activity is expected to decline by more than half between the years 2030 and 2040. Researchers made the prediction way back 2015, which means the next Ice Age could happen in less than 15 years. It may not be the full-blown Ice Age our planet experienced centuries ago but in less than 15 years, there could well be a mini Ice Age

The last mini Ice Age, also known as the Maunder Minimum, occurred between the mid-1600s and early 1700s. The north hemisphere was engulfed in extremely harsh winters. In fact, the London’s river Thames froze and Siberia was completely covered in ice during this period. Much of northern Europe was stock-still frozen. Though there is not enough quantifiable data to show how many creatures died or went extinct, it is a well-known fact that the Maunder Minimum was responsible for the spread of mountain glaciers across the Alps, Alaska, Ireland and parts of Norway.

2030 onward could possibly be another mini Ice Age. Researchers made the prediction based on a 172 year old discovery about the sun’s “11-year heartbeat.” According to scientists, the sun’s magnetic activity changes every 10 to 12 years, which makes it difficult to arrive at accurate solar cycle forecasts. Thanks to a new technology developed by a mathematics professor, Valentina Zharkova from United Kingdom’s Northumbria University, scientists can now predict the shape of solar cycles with an accuracy rate of nearly a hundred percent.

Humans still have a lot of time left before the next big Ice Age, but we may not be able to escape the possibility of a Maunder Minimum. Now that we have been forewarned, however, the only way to avoid collateral damage is sufficient preparation.