Imagine in the next 5 to 10 years the first responders to a disaster, such as fire, may be animal-like machines. The four-legged robo-rescuers will be finishing the dangerous tasks instead of humans, bounding through a fire, pick their way through a minefield or searching for survivers among the earthquake ruins.

“Say there are toxic gases leaking in a building, and you need to close a valve inside, but it’s dangerous to send people in,” Kim says. “Now, there is no single robot that can do this kind of job. I want to create a robotic first responder that can potentially do more than a human and help in our lives.”

The team is working toward that goal, borrowing principles from biomechanics, human decision-making, and mechanical design to build a service robot that Kim says will eventually do “real, physical work,” such as opening doors, breaking through walls, or closing valves. 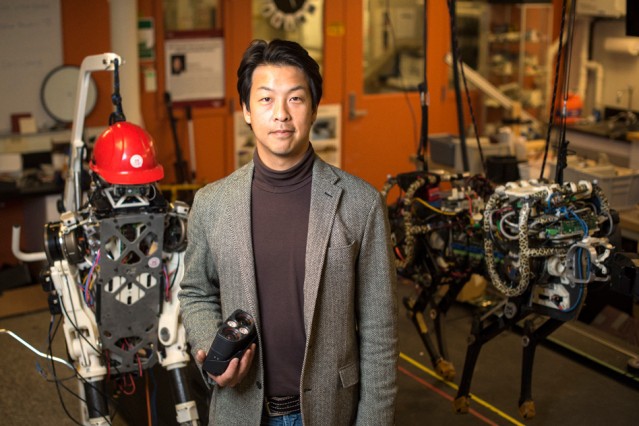 Sangbae Kim is working on the development of so-called Robo-rescuers. Source: MIT

In his lab, Kim is developing a robo-rescuer by fusing his two main projects. Actually, he is trying to make a robot-rescuer by merging the components of the two robots.

The first one is MIT Cheetah, a four-legged, 70-pound robot that runs and jumps over obstacles autonomously. The second one is HERMES, a two-legged, teleoperated robot, whose movements and balance are controlled remotely by a human operator, much like a marionette or a robotic “Avatar”, MIT explains.

To achieve his goal, Kim is constantly observing animals and human – their anatomy, moves, motions and muscle functions. He says it is a complex process to find out useful principles overarching the differences between animals and machines. “Sometimes obsessing over animal features and characteristics can hinder your progress in robotics”, he adds. “It’s all based on muscle function, and I’m still figuring out things in that world, and also in the robotics world.”

For many years, Kim was working on various startups but he was working mainly on small robots. Eventually, his goals changed. “I was moving away from small robots because it’s very difficult for them do to real, physical work,” Kim says. “And so I decided to develop a larger, four-legged robot for human-level physical tasks — a long-term dream.”

This talented research scientist, born in the South Korea, finds a great excitement in science and working in a lab. “I imagine a robot that can do some physical, dynamic work,” Kim says. “Everybody is trying to find overlapping areas where you’re excited about what you’re working on, and it’s useful. A lot of people are excited to watch sports because when you watch someone moving explosively, it is hypothesized to trigger the brain’s ‘mirror neurons’ and you feel that excitement at the same time. For me, when my robots perform dynamically and balance, I get really excited. And that feeling has encouraged my research.”