Fifty endangered Key deer have been euthanized since a screw-worm infestation popped up in the Florida Keys and wildlife officials are taking drastic action to get the problem under control.

The screw-worm is the larvae of the screw fly and is the only insect known to eat the living flesh of warm blooded animals, the U.S. Department of Agriculture said.

The maggots enter the body of an animal through an open wound and feed on the flesh for about a week before burrowing into the ground and emerging as adult flies.

While they feed, the wound grows significantly and if not treated can be fatal, the Florida Department of Agriculture said.

“Florida producers know all too well that we can almost never completely rule out the reappearance of pests and pathogens that were believed to be eradicated,” Payne said. “The good news is, UF/IFAS has dealt with this kind of unexpected crisis before and we’re already fully engaged in this effort.” 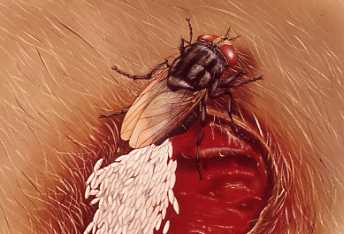 James Lloyd, D.V.M., Ph.D., dean of the UF College of Veterinary Medicine echoed Payne’s sentiments and noted that a member of the college’s faculty, parasitologist Heather Walden, was involved in confirming the initial identification of specimens collected from infected deer.

“There’s no cause for alarm, but we are very concerned because the New World screwworm fly, historically, was one of the most serious pests affecting Florida livestock production,” Lloyd said. He added that no screwworm cases have been reported in livestock or people as part of this outbreak.

While not prevalent, human cases of screw-worm infestation have been recorded, the USDA said.

When a person or animal is infected, the result is incredibly painful and gruesome, the department said.

“(The screw-worm) has caused immeasurable suffering and losses in livestock, wildlife, and even human populations the world over,” the USDA said on its website.

Euthanasia was necessary for the 50 deer affected by the infestation so far because they were “in such deteriorated condition,” the FDA said in a release.

Jack Payne, UF senior vice president for agriculture and natural resources, noted that the outbreak appears to be limited to a small area but affirmed that strong, immediate action is needed to manage the outbreak and resolve the situation. He confirmed that UF/IFAS personnel will be assisting colleagues with the U.S. Department of Agriculture and Florida Department of Agriculture and Consumer Services, which made the initial announcement in a news release found at http://www.freshfromflorida.com/News-Events/Press-Releases/2016-Press-Releases/USDA-Confirms-New-World-Screwworm-Cases-in-Big-Pine-Key.

Island LifeWhere can you find the smallest white-tailed deer in the U.S.? In the Keys, of course! Key deer can be found…

Extension personnel are being informed about the screwworm outbreak and information on management will be distributed to UF/IFAS Extension county offices statewide, so that Extension personnel can address concerns from ranchers, livestock owners and concerned residents.