Todd Orr was on a morning hike in the Madison Valley when he saw a female grizzly and her cubs a few meters from where he was.

Despite the cries of the man, who usually would flee the animal, the mother rushed to him.

He was attacked twice by the same animal. The hiker had the reflex to protect his neck, a gesture that probably saved her life.<
The man managed to walk to his car for 45 minutes to contact a farmer on the road to ask him to call 911 and to drive to the hospital.

He posted video and photos of his injuries on the social network after being mauled by the same bear in two separate attacks.

The 50-year-old was scouting for elk in Madison County on October 1 when a bear protecting her two cubs charged, jumped on him and began biting his neck.

“I gave her a full charge of bear spray at about 25 feet,” he explained in a Facebook post. “Her momentum carried her right through the orange mist and on me.

“I went to my face in the dirt and wrapped my arms around the back of my neck for protection. She was on top of me biting my arms, shoulders and backpack. The force of each bite was like a sledge hammer with teeth. She would stop for a few seconds and then bite again. Over and over. After a couple minutes, but what seemed an eternity, she disappeared.”

A stunned Mr Orr added he “had numerous bleeding puncture wounds” after the first attack but was able to walk and started to head back to the safety of his truck three miles away.

However minutes later he saw the bear again and faced another attack, explaining: “She slammed down on top of me and bit my shoulder and arms again.

“One bite on my forearm went through to the bone and I heard a crunch. My hand instantly went numb and wrist and fingers were limp and unusable. The sudden pain made me flinch and gasp for breath. The sound triggered a frenzy of bites to my shoulder and upper back. I knew I couldn’t move or make a sound again so I huddled motionless. 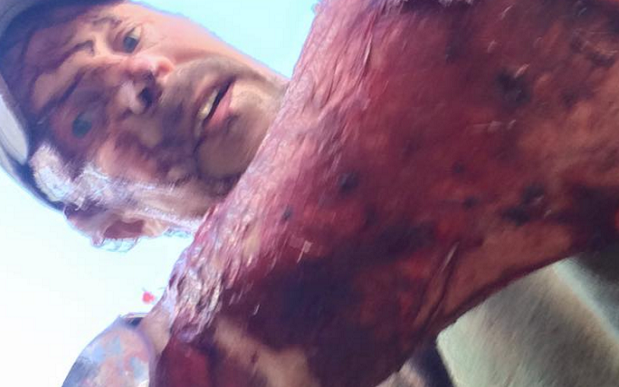 “Another couple bites to my head and a gash opened above my ear, nearly scalping me. The blood gushed over my face and into my eyes. I didn’t move. I thought this was the end. She would eventually hit an artery in my neck and I would bleed out in the trail… But I knew that moving would trigger more bites so a laid motionless hoping it would end.”

After arriving at hospital he required eight hours of stitching to his “arm and shoulder punctures and tears”. 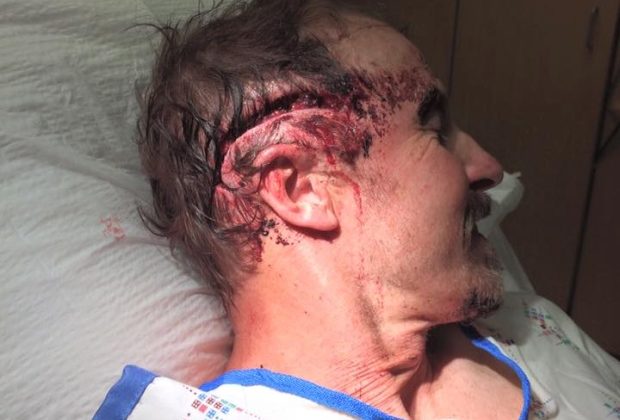 Todd Orr posted this photo to Facebook depicting the head wound he suffered in the grizzly attack being treated in hospital. (Todd Orr/Facebook)