Flamingo is a bird of South America jungles, warm Caribean islands and landscapes of Africa. If you had spotted an elegant pink bird standing on just one leg somewhere in the north of the US you wouldn’t have believed your own eyes. But that was a usual sight on the Great Salt Lake for almost twenty years.

In 1987 a Chilean flamingo escaped from Salt Lake City’s Tracy Aviary. By a mistake, his wings were not clipped, so he could fly off wherever he liked to. Soon after the escape from the aviary, the shores of the Great Salt Lake became the winter home of this solitary flamingo.

This unusual event attracted a huge media attention. Soon, everyone got familiar with this rare bird and Utah’s flamingo became a celebrity. Although the bird’s gender was not actually known, the bird was often referred to as “he”. Eventually, he was named after the famous English rock band – Pink Floyd.

In the environment not even similar to his natural environment, Pink Floyd flamingo had lived in the wild, eating brine shrimps that pervade the lake and socializing with various Great Salt Lake bird species. His feathers were distinctly pink, due to the carotenoids in the shrimps which he found as the nourishment. He had a beautiful red and black highlights on his wings. 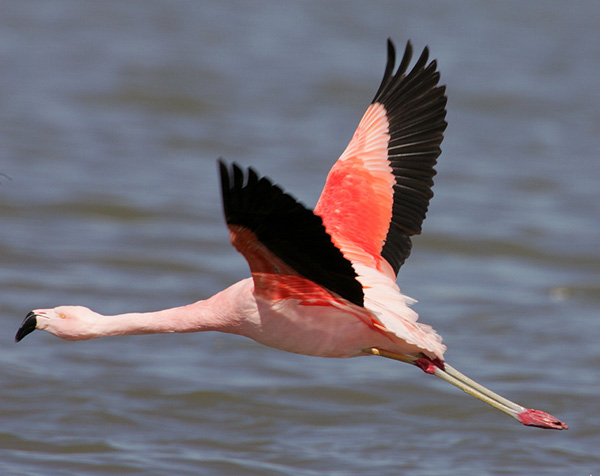 But soon Pink Floyd flamingo became a topic of many controversies. A few people formed the group “Friends of Floyd”, suggesting petitioning the state to bring more flamingos to the lake to keep Pink Floyd a company and make him feel more comfortable. One of the aims was making a possible tourist attraction. The donors actually pledged a total of $25,000 to bring 25 flamingos from South America.

The scientists and wildlife biologists resisted these efforts, saying they didn’t see a value in bringing flamingos. They tried to explain that deliberate introduction of a non-native species would be ecologically unsound and might have detrimental consequences.

But, before this foolish human idea was materialized, Pink Floyd had disappeared from the Great Salt Lake area. He was last seen in Idaho, his summering grounds, in 2005. His fate remains unknown, but it is presumed that Pink Floyd did not survive the winter of 2005–2006.

Nevertheless, this uncommon event was one of the many examples where humans tried to somehow disturb the balance of nature.